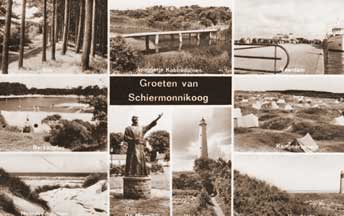 The name ’schiermonnikoog’ is derived from the monks who used to live on the island. The earliest inhabitants of the island are the brothers of the Cistercian monastery Klaarkamp in the province of Friesland. The monks wore ash-grey habits: ’schier’ means ash-grey, ‘monnik’ means monk, and ‘oog’ means island. The island was expropriated in 1580 and came into the possession of the States of Friesland. The island was sold for financial reasons in 1638. In 1640, there was a new owner, the noble Stachouwer family. This family remained the owner of the island for two centuries. In the seventeenth century, there used to be another village than the current one. It was called Westerburen and consisted of four areas. Due to wear and tear, the village had to be abandoned. Now, there is only one village on the island. It used to be called Nye Dorp, but in 1843 it was officially given the name Schiermonnikoog. In 1860, the island was sold to J.E. Banck, who has done much good to the island. A sea embankment was constructed under his supervision, which caused a polder to come into being, which was called after him: ‘Banck’s polder’. Banck sold the island to Von Bernstorff, a German count, in 1892. He had the woods planted on Schiermonnikoog. The island was German property until World War II. After the war, the management was transferred to the ’service of Domains’, which still manages some recreational areas. In 1989, the last nature reserve was designated: the National Park. These nature areas fall under the management of the Vereniging Natuurmonumenten, and the Department of Waterways and Public Works looks after the sea walls. 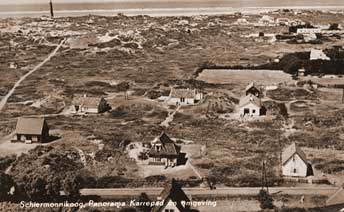 In 1830, Schiermonnikoog first acquired a life raft, which was a rowing boat. The first boathouse was built in 1860, so that the life raft could be stored there when not in use. The boathouse was located in a central position in the village, because the life raft had to be put to use on two locations: the Wadden Sea and the North Sea. If the crew had to go to sea and brought back a drowned person, he or she was buried in the dunes Kooiduinen. This was later turned into the cemetery ‘vredenhof’ (‘peaceful garden’). 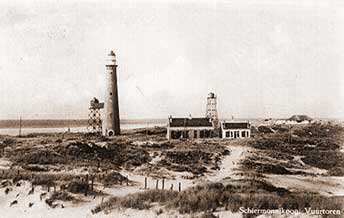 From 1600 until 1850, most people mainly worked in fisheries and seagoing. A number of fishing boats regularly went to catch fish, but in the eighteenth century the number of fishing boats rapidly declined. People transferred their attention to something else, namely merchant navy and coastal trade, the transporting of goods by means of ships. Besides fisheries or seagoing, everyone had a patch of land, which was rented from the Stachouwer family. Until 1900, the dunes and surrounding areas were very intensively used for agriculture, and arable farming was practised on the flat parts surrounding the village. Cattle grazed on the more rough plains and here the hay was harvested. Marram grass was picked from the dunes. People made mats from this grass by braiding it. In 1872, the island got a nautical college; many islanders attended this school in order to become a captain or navigating officer in the merchant navy. They did not stay to live on Schiermonnikoog but instead moved to the larger seaport towns, so that they lived close to work. For this reason, the population decreased from 1000 to 600 people. The nautical college was closed in 1934. 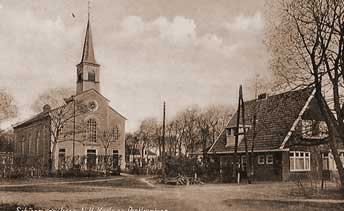 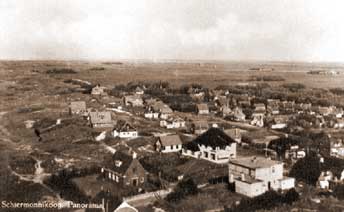 The island of Schiermonnikoog was not involved in heavy fighting during the war. However, a number of bunkers were built, and the island was freed, just as the rest of the Netherlands. Bunker Wassermann is one of the objects still reminding of the war; it was part of the bunkers essential in operation Atlantikwall. It was first used as a restaurant but it only provides a nice view now. Cemetery Vredenhof (‘peaceful garden’) also still reminds of WW II. The people constructing the cemetery were Count Von Bernstorff and some other islanders, including Sake van der Werff. He was the then hotel owner of Van der Werff. He and his son have also been buried on this site.

In 1887, the first seaside hotel was built, which was largely financed by Mr Banck. Later on, also guest houses, summer houses and a bus service were established on the island. In 1866, a seaside committee was appointed, which had to turn the island into a seaside resort. Tourism then rapidly increased and many people established their own guest houses. Most seaside visitors were rich people from the city of Groningen and the north of Germany. Later on, besides the rich people there were also visitors who had less money to spend; they were the ones staying in the guest houses. In 1920, the first real summer houses were built. The first seaside hotel on Schiermonnikoog was, as mentioned above, built in 1887. The hotel had 60 rooms, basins and halls that were attractively furnished. Deck chairs were already rented on the beach, and there was even a boat transporting the guests from and to the beach. Due to nature, it was impossible to preserve the hotel at the former location. The sandbanks slowly moved and fragments of the hotel broke off in 1923. The rest of the hotel and the boulevard plunged into the sea in 1925. The hotel was rebuilt later on, but then further inland. After World War II, mainly day trippers visited the island and the facilities were aimed at them. Restaurants, hotels, holiday resorts and summer cottages were built in large numbers. Six out of the seven farmers extended their farms with additional sleeping accommodation for tourists.